Coll 30/86(3) 'PERSIA. Relations with Iraq: Shatt-el-Arab. Establishment of an International Conservancy Board.'

674 items in this record

The record is made up of 1 file, in 2 parts (329 folios). It was created in 14 Apr 1937-5 Mar 1946. It was written in English. The original is part of the British Library: India Office The department of the British Government to which the Government of India reported between 1858 and 1947. The successor to the Court of Directors. Records and Private Papers.

The papers cover: Perso-Iraqi frontier negotiations; drafts, signing (July 1937), and ratification (June 1938) of the Perso-Iraqi Frontier Treaty; Turkish approval of the frontier negotiations; the signing of the four power non-aggression pact between Iraq, Iran, Turkey, and Afghanistan (the Saad-Abad [Saadabad] Pact), 1937; Abadan anchorage; Foreign Office memoranda and minutes of meetings concerning a convention for the conservancy of the Shatt-al-Arab; the question of British participation in the convention; lighting and buoying; the involvement of Sir John Ward [serving with the Iraqi Government] in the discussions; the opposition of the Iranian Government to British involvement; the involvement of the Anglo-Iranian Oil Company (AIOC); the Port of Basra (including Foreign Office memorandum, folios 77-83); the Rooka Channel; and renewed discussion of the issue in 1945, including the importance of the Shatt-al-Arab for tanker traffic to supply Britain's war needs in the Far East.

The main correspondents are the Foreign Office, the British Ambassador to Iraq, and HM Minister, Tehran.

The French language content of the file consists of approximately twenty folios of diplomatic correspondence and treaties.

The file includes a divider, which gives a list of correspondence references contained in the file by year. This is placed at the back of the correspondence.

The papers are arranged in approximate chronological order from the rear to the front of the file.

Foliation: this file consists of two physical parts. The foliation sequence commences at the first folio of part one (ff 1-169) and terminates at the last folio of part two (ff 170-329); these numbers are written in pencil, are circled, and are located in the top right corner of the recto The front of a sheet of paper or leaf, often abbreviated to 'r'. side of each folio. An additional foliation sequence is present in parallel; these numbers are printed, but are not circled. A previous foliation sequence, which is circled, has been superseded and therefore crossed out. The front and back conservation covers (parts one and two), have not been foliated.

This record has a IIIF manifest available as follows. If you have a compatible viewer you can drag the icon to load it.https://www.qdl.qa/en/iiif/81055/vdc_100000000648.0x000173/manifestOpen in Universal viewerOpen in Mirador viewerMore options for embedding images

Reference
IOR/L/PS/12/3804
Title
Coll 30/86(3) 'PERSIA. Relations with Iraq: Shatt-el-Arab. Establishment of an International Conservancy Board.'
Pages
282r:283v, 285r:286v, 295r:297v303r
Author
Government of Iran
Usage terms
The copyright status is unknown. Please contact [email protected] with any information you have regarding this item. 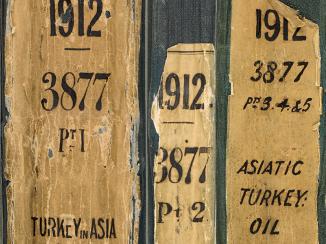 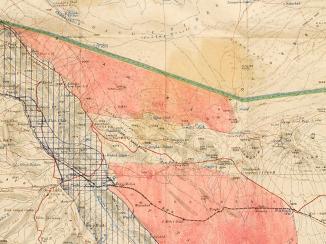