298 items in this record

The record is made up of 1 volume (145 folios). It was created in 16 Jul 1930-11 Jul 1931. It was written in English. The original is part of the British Library: India Office The department of the British Government to which the Government of India reported between 1858 and 1947. The successor to the Court of Directors. Records and Private Papers.

The volume contains the annual Government of Bahrain reports for the years AH 1348 and 1349. Both reports include budgets for the upcoming year and are written by the Adviser to the Bahrain Government, Sir Charles Dalrymple Belgrave.

The reports are submitted by Belgrave to the Political Agent A mid-ranking political representative (equivalent to a Consul) from the diplomatic corps of the Government of India or one of its subordinate provincial governments, in charge of a Political Agency. at Bahrain, Charles Geoffrey Prior, who then forwards them to the Political Residency A diplomatic office of the British Government established in the provinces and regions considered part of, or under the influence of, British India. in the Persian Gulf Historically used by the British to refer to the sea area between the Arabian Peninsula and Iran. Often referred to as The Gulf or the Arabian Gulf. , at Bushire. The correspondence relating to this process are included in the volume.

The 1348 report (folios 8-68), submitted in July 1930, is divided into sections corresponding to a particular subject, as follows: Budget 1349; Notes on Budget, for 1349; Notes on Revenue for 1348; Notes on Expenditure; Education; Judicial; Public Works; Wakf Departments; Municipalities; General.

The report includes an index (folio 8) which lists the sections in alphabetical order, with reference to page numbers. Most of these page numbers are not present in the document itself.

Folio 69 is a letter from Belgrave to Prior regarding two Bahraini boys educated at the American University of Beyrout [Beirut].

Folios 135-37 are correspondence between Prior and Claud Cranbrook Lewis de Grenier, Director of Customs at Bahrain, regarding a recent drop in trans-shipment duty in Bahrain.

The volume contains the following photographs:

Folio 116 is a blueprint of the new quarantine.

The volume is arranged chronologically.

Foliation: the main foliation sequence (used for referencing) commences at the front cover with 1, and terminates at the inside back cover with 147; these numbers are written in pencil, are circled, and are located in the top right corner of the recto The front of a sheet of paper or leaf, often abbreviated to 'r'. side of each folio. An additional foliation sequence is present in parallel between ff 25-70; these numbers are also written in pencil, but are not circled, and are located in the same position as the main sequence. A previous foliation sequence, which is also circled, has been superseded and therefore crossed out.

This record has a IIIF manifest available as follows. If you have a compatible viewer you can drag the icon to load it.https://www.qdl.qa/en/iiif/81055/vdc_100000000241.0x000101/manifestOpen in Universal viewerOpen in Mirador viewerMore options for embedding images 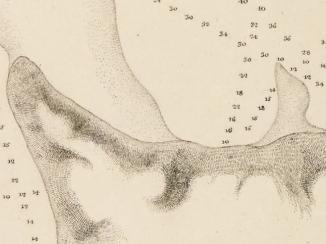 George Barnes Brucks and the First English Survey of the Gulf